Home/Uncategorized/Stuck on level 3
Previous Next 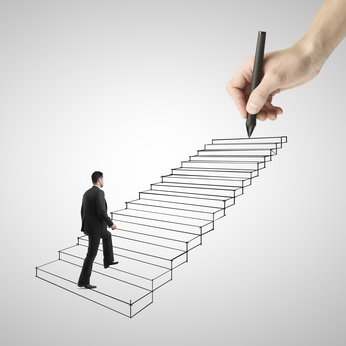 How high are you in your organization? Do you want to get any higher? If you are already at the top, do you want to be at the top of something even bigger? An email this week triggered a troublesome thought in my head and I want to get rid of it…

A manager was complaining that his team would be demotivated if they knew that there were to be no pay-rise driven promotions this year (as if promotions were some kind of bonus system).

Now I can imagine that in any one department there must be some who are working hard for one thing only – to get promoted. But surely the majority must be working because the job’s OK or for other reasons rather than aiming to go up another level in the organization?

Some managers seem to be fixated by the belief that the best way to motivate their people to stay (and to do their work) is by increasing their basic pay above the rate of inflation, at least once per year. The problem is that, sooner or later, the companies grading system will require the manager to promote them, regardless of whether the employee wants the additional responsibility or not. I cannot help thinking that too many companies are getting stuck in their dangerously antiquated HR grading systems like luxury old-timers in a field of mud.

We all know that in many corporations too many people end up being promoted at least one or two levels higher than is actually comfortable for them. And it is far too easy to point the finger at the employee, rather than the system that encouraged it to happen.  (Not to mention the financially devastating secret deals done to over promote favored colleagues in their last few years of service, to secure them a larger pension).

Although the electricity of working with young people eager to achieve an outstanding career can be very invigorating, I must say I do like working with people who simply enjoy their job for what it is; People who revel in the content and are genuinely open to find better ways of doing what they do, not only for themselves but for the good of the business or, indeed, for the sheer pleasure of witnessing progress and learning new things. Not everything we do needs to be linked with money, there are many other kinds of rewards that seem to be over-looked.

There was a rock album back in the seventies called ‘Live in Japan’ on it one member of the band asks the sound engineer to turn the volume up and a fellow musician asks for ‘everything to be louder than everything else’!  Maybe that’s what too many businesses are trying to do? To make everyone higher than everyone else? Not because they truly desire leadership but because the only way to reward them is by paying them more and for that they are obliged to be promoted to the next level.  Shame.