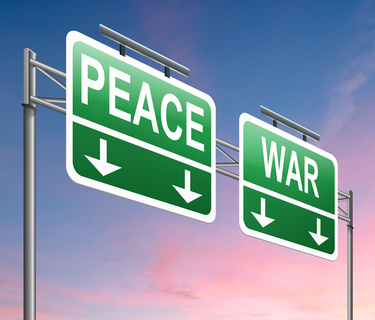 I don’t suppose there can ever be a bigger decision for any leader to make than to decide to go to war; be it the president of a country or a gang leader in an inner city suburb. This week I have been reflecting on big decisions, how they are taken within business; not only in the boardroom but also within projects and in our private lives.

Jack Straw, a former Foreign Secretary in the UK under Tony Blair was right in the middle of the decision to go to war in Irak. In his latest book ‘Last Man Standing’  he tells how there was only two options on the table and that he was definitely leaning towards not going to war (this is not surprising because he was known for his pacifist leanings) however, over time, he felt himself getting ‘sucked in’ to the taking the War recommendation from his leader and colleagues. But he is not the only one, there are countless cases in history where people have rallied together to take, what can later be judged as ‘irrational’ decisions.

From boardrooms to war cabinets there are similar patterns at play: A strong leader with deeply felt beliefs, surrounded by colleagues that are prepared to challenge for a while until a certain point comes where they find themselves all moving in the same direction.  Generally we applaud this, because it allows us to move forward, but it is often not one might logically do.

Jack Straw argues that strong procedures help to mitigate this effect but I wonder if they do or if we end up in a stale compromise deadlock.  The Quakers have a policy of never voting and I tend to follow that line because the minority can (and often are) right but for any decision to work it needs the full support of the whole team and there we need to establish supportive consensus, rather than compromise.

What concerns me most is mankind’s apparent inability to take really big impartial decisions. People are governed by emotions and not reality and when emotions come into play, impartiality tends to fly out the window. Clear thinking, intelligent humans become biased; narrow minded opinionists. (If you think you’re immune, reflect on the decision process you typically take when making purchasing decisions: cars, gadgets, houses; holidays etc. and how you then justify them to those loved ones that surround you that might have other ideas or priorities)?  The psychologist Jeremy Dean has a very interesting article on his blog on the 12 laws of emotions and law three touches on the area which I am writing this week.   Law three: ‘The Law of Apparent Reality’ seems to back up my theory.

Just a few thoughts and some interesting reading for the beach or a shady spot under a lime tree!