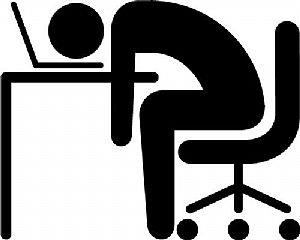 There are many people that believe that without the physical company of others, we fall apart. For example how can you know when someone needs motivation if they are sitting alone at home? Is a question I often hear these days?

Apart from the obvious use of Skype an Microsoft Lync, there are other much more pragmatic and dare I say more effective ways of calling out for help when we feel the need.  By using powerful symbols via Facebook and other channels it is surprising how much support one can receive. The use of smilies is OK but there are other types of images that give much more information, especially as a smiley (or frowney) is often too small to recognize the subtlety of the emotion it is trying to convey.

The image I have chosen for this week’s blog  was recently used by a friend of mine. She used it as a cry for help when one morning she felt a serious lack of motivation. Within minutes she had received some comforting messages, tips and advice from her friends. By the end of the day she had a whole bunch of supporters motivating her on. Now that would not happen in an office where Facebook and Twitter are not accepted as a legitimate form of communication would it?

Another aspect that I find worthy of considering is that in offices, hidden agendas are everywhere and one is often obliged to explain the context and why you might be unhappy, angry or concerned which, by definition, takes the emphasis off you and onto someone else. So in this case the reaction is not “oh you poor thing” but “My God he’s a bastard”.  In fact in this situation our colleagues are obliged to be rude about the perpetrator in order to show sympathy. So by using an image to express a mood on Facebook our friends become not so concerned about the history that caused it but about what message they can send us to make us feel better. Words of reassurance rather than anger. There is no need for names or blame games.

Who knows? One day we might all have an extra line on our keyboards (virtual or real) to cover our gallery of emotional icons)? I guess there’s an Apple or Android AP out there already?