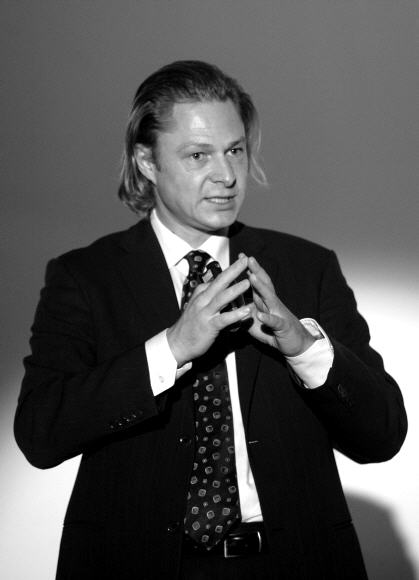 Today you will be taken into a very meaningful story by Kurt De Ruwe, CIO at Bayer MaterialScience, Kurt holds a solid track record of delivery and innovation both for business process and IT technology related activities.

When Harley asked me to write a blog I initially thought about writing about the difference in the sales and marketing approach of two big software companies.  One has good software but has sales people that are not able to explain and sell it, the other has sales and marketing people that are capable of selling hot air but the software does not always work as they make it appear.

I read Harley’s blog almost weekly and for me a good blog needs to leave something behind.  A little teaser in your brain that in the days after you have read, pops up now and again and makes you think or makes you dream.

A recent event reminded me of how important family is and this is why you will now get something totally different.

Since 3 years I work during the week in Germany and return to spend the weekend in Belgium.  My wife handles nearly everything but when it comes down to mathematics and helping the boys this is my task.  Some time ago my eldest son had a big test on a Wednesday and on that Monday we spent nearly 4 hours using Skype, MSN, webcams… to get him to a point where he got the concepts of what he had to learn.  The Tuesday afternoon he called me almost in panic as he still had not grasped it.  I cancelled my afternoon meetings and drove to Belgium.  We sat down and surprisingly 15 minutes later he got it.  He was embarrassed because I drove so far but for me it was worth it.

Before you start seeing me as ‘Super Dad’, I must admit that this is one of the rare occasions where I put everything aside to help him out.

Often we sacrifice a lot of things for our career and unfortunately it always is when it is too late or nearly too late that we realize this.  The remainder of the blog is a text I received myself which I would like to share with you.  Hopefully it will trigger something.   You can stop reading here but if you continue you need to read to the end.  I do not know the author but I relate to it from time to time.  If you recognize yourself in it then know that you have the power to do something about it.  I wish that my sons, when they were 5 or 6 years old, would have asked me for 7 Euros.

A man came home late from work, tired and irritated. His five year old son sat in front of the door waiting for him:
Son: “Daddy may I ask you something?”
Father: “Yes, of course, what is it?”
Son: “Daddy, how much you earn per hour?”
Father: “That none of your business, why do you ask such things?” said the angry father.
Son: “I just want to know. Please tell me how much you earn per hour?”
Father: “If you really want to know, I make 14.00Euro per hour”
Son: “Oh” said the son with his head bowed
Son: “Daddy may I please borrow 7.00Euro?”
The father was furious. If the only reason why you ask me so you can borrow money for some stupid toy to buy then you can immediately go up to your bed. And think about it why you are so selfish. I’m not going to work hard every day for such childish silly things.
The boy quietly went to his room and shut the door.
The man sat down and was still angry about the questions of his son. “How dare he ask such things just to get money?”
After an hour or so, the man calmed down and started to think:
Maybe the child really urgently needs to buy something with the 7.00Euro, and actually the child never really asks much about money.
The man went to the boy’s room and opened the door.
“Are you asleep, son?” asked the father
“No, Daddy. I’m awake.” Said the son.
“I’ve been thinking, maybe I was too hard for you. It was a long day and I have vented on you. Here is the seven Euro you asked.”
The boy laughed and sat upright. “Thank you daddy!” he cried. Then he took from under his pillow some coins.
The man saw that the boy already had money and became angry again.
The boy sat quietly counting his money, and then looked to his father.
“Why ask me money if you already have money?” the father grumbled.
“Because I did not have enough.” Replied the boy.
“Dad, I now have 14.00Euro. Can I buy one hours of your time? Please come home tomorrow one hour earlier. I would like to eat with you.”
The father was touched. He put his arms around the boy and asked him to be forgiven.

It is a little reminder to all who work hard in life. We cannot let time slip through our fingers without spending any time with those who really count for us. It is all about finding a balance.

Kurt studied Economics at Antwerp University.  After early assignments at IBM and then Mobil focusing on business analytics he joined ICI in the role of Development Manager.  By the age of 33 Kurt was appointed Global IT Director, holding that position until 2007 when he became Global CIO for Bayer Material Sciences in Leverkusen, Germany. Kurt has a solid track record of delivery and driving innovation both for business process and IT technology related activities. He has built a reputation for daring to take on the seemingly impossible and driving it through to successful fruition, if there is a strategic advantage for the business to embrace technological change then Kurt is not afraid to be the first to use it.  Strategic advantage often means getting there first.